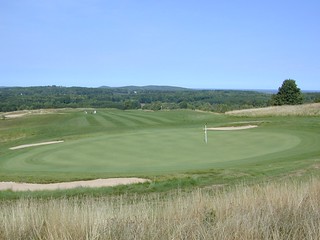 Those familiar with the Pinecroft Golf Plantation know what good golfing ground the rolling hills east of Beulah make. These former orchards and tree farms rank with Antrim Dells, and some of the other northwest Michigan courses that derive so much character from the land they’re built on.

Pinecroft has become known as a nice course with a million dollar view of Crystal Lake. Champion Hill is destined for much higher praise. The links disciples who are relegated to peering through the gate at exclusive Crystal Downs can avoid that frustration by driving 15 miles east, and playing a layout that Alister MacKenzie’s ghost might have paced off.

#1: It doesn’t have the Down’s dramatic start from the perched clubhouse and tee; you’ve got some climbing to do first. It is a great little uphill par four, with big, deep-faced fairway bunkers placed perfectly to catch your opening tee fade. Watch out for more bunkers around a semi-blind green.

#2 – A roller coaster fairway with an old apple tree in the fairway for a target, a beautifully sculpted green, and a classic pot bunker in the back start to show the course’s British flair.

#3 – From the blue tees this is a monster, taking all you’ve got to get it up and over the rising hill and ominous bunkers. From the white tees the bunkers aren’t much threat, and the closer you get to this green, the better. There are some real mystifying pin placement possibilities on this green.

#4 has a very British feel. Big wide fairway and great view from the elevated tee. Now you’re up where you can see both Crystal Lake and Lake Michigan, and even a glimpse of the Sleeping Bear Dune cliffs.

#5 is a controversially short par 5–only a driver/five iron from the white tees, because of the easy-to-cut corner. It is a real ego boost to have a Tiger-Woods-like chance at an eagle, but if there’s a hole that will need to be re-worked, this is probably it. The green does present some very tricky chipping and putting, so a sub-par score is by no means guaranteed.

#6 – The first of four longish par 3s (they average 170 from the whites and a whopping 223 from the blues). This one presents a nice amphitheater, uphill slanting green. The danger is not getting it up to the hole — be bold.

#7 plays as much longer than it looks than #5 plays short. They both measure 520 yards, but couldn’t be more different. This one’s uphill all the way, with a well-placed fairway bunker daring you to get close in two.

#8 – At 185 yards, this was a daunting drive into the Nor’easter we played in. You may have to swallow your pride and pull out a wood on some of these par threes. This green is long enough to runway a Cessna, so reaching the front edge leaves you plenty of work to do. A magnificent, three-county view from here.

#9 may be the hardest driving hole yet, with two gnarly bunkers taunting you to carry them. Fairway slopes away to the right, making it even harder to avoid trouble. It’s hard to consider laying up on a hole with no trees or water, but this warrants just that.

A note about the greens: They are large and well-guarded by sculpted bunkers. There is barely a flat spot on them, and the only straight putts are the up-hillers. Take the time to look at the pin placements and pick out the uphill angle for your approach shot.

A note about the trees: There aren’t any to speak of.

Says co-owner/builder Lee Stone: “To promote the openness of the land we wanted wide landing areas, elevated tees, and large green complexes wherever possible. We used fescue in the deep roughs to define the fairways instead of trees. In fact there are only several trees that come in to play on the whole course.”

Said one of my playing partners after our round: “The layout is nice because you can see just enough of the rest of the course but you don’t feel like you are in the way of anyone. I also like that there are so few trees.”

I agree completely. That may be one of the great things about this course and some of the aforementioned layouts–they are built on former orchard land that is cleared of trees, giving the land a British look and feel.

Stone: “Our layout used the existing characteristics of the land to define each golf hole. As compared to most golf construction sites, very little earth work was involved other than the tee and green complexes. This lack of excessive earthmoving is in part what keeps a natural look to Champion Hill.”

With that, we make the turn…

#10 starts out with a homage to the British-style heather. This is the longest of the par 4s, and the bowl-shaped green is kinder than most.

#11 may come to be known as one of the finest par 3s in the area. The British flair continues, with a Redan-style green complex surrounded by a veritable showcase of beautifully sculpted bunkers. Pots, waste, and snake-shaped traps guard the elevated green. A Classic.

#12 is a tough driving hole, as you can’t see it from the tee, but the fairway slopes away hard to the right. Guess what, the green is almost as wildly sloped.

#13 is the easiest of the par 3s, protected from the weather and an inviting target.

#14 is another tricky driving hole, but possibly reachable with a big north wind. But lose it right and it’s gone. Bunkers and an elevated even out the risk/reward ratio.

#15 is the signature hole in my book. This one really impressed me with an elevated tee, rolling fairway, and the prettiest green view on the course, with a classic pot bunker and another old apple tree completing the still life. Also the most interesting green design, with a surprise back half that slopes away. This is the kind of hole you never forget.

#16 – A major driving hole–longest of the par 4s, so you’re inclined to let’er rip, but this is the most dangerous place to lose it right. If there’s any place for course management and playing for bogey, this is it.

#17 is the first of back-to-back par 5 finishing holes, a first in my memory. A LOT can happen on these two holes — a five-shot swing in our match — so it’s a very interesting concept. This hole is mystifying from the tee, as a serpentine fairway heads every which way. With good planning you’ll have a chance to cut the dogleg and go for it in two, but a deep bunker guards that side, so it’s all carry.

#18 is the longest and toughest of the par 5’s. It’s a zinger of a finishing hole, with a large pond to carry at the end. The water is bermed, so only balls that deserve it get wet, but that’s the only break you get. The giant maple behind the green is the best finishing tree you’ll ever see.

Not to sound overly dramatic, but Champion Hill really impressed me, and I couldn’t stop comparing it to nearby Crystal Downs. Rated among the world’s top courses, the Downs is way overpriced and almost impossible to get on. I find it fitting that a man like Lee Stone, who grew up farming and nurturing the land, could give this kind of gift to all of the golfers lucky enough to come across it. In his words: “To be sure, it was and is a very special piece of property and by turning it into a public golf course many many people will be able to enjoy it.” Amen. 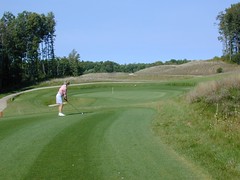 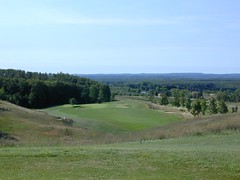 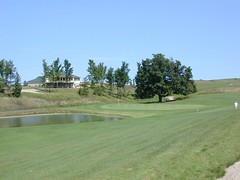