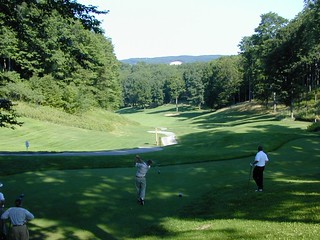 I know that this may come as a disappointment to some but this is not a story about me. I’m only a legend in my own mind.

No, this is about a true legend, Arnold Palmer, or at least about a course he designed called “The Legend” at Shanty Creek.

Arnold transformed this piece of northern Michigan landscape. He took the big trees, the water, the creeks, the wetlands and the sand and gave us one beautiful course. It still amazes me how these people can take a chunk of land that is full of ravines and trees so thick you can’t see more than a few yards and come up with a course that makes sense.

I guess that’s why he’s a legend and I run a motel.

The Legend begins with two of the nicest starting holes in the north. The first is a par 5 where the fairway keeps going down all the way to the green. It’s just a great hole from every point of view. After the leisurely trip down the valley on hole one, you have to climb out of the valley on number two. This trip is a little more daunting. From the tee, you have to hit over a ravine to a not-too-large plateau. If you land safely there you have to hit over another ravine to the green. This hole is not for the weak of heart.

You could call the first two holes “The Beauty and the Beast”.

The rest of the course is more like the first hole — tees that are set high with tree-lined fairways falling away in front of you. Of course not all the tees are up, but enough to make for some great views.

The large, well-maintained, bent grass fairways give you the impression that it’s almost impossible to get in to trouble at the Legend. However, quite often the angle of these fairways just beg you to cut a corner here, hit over that tree there. They present you with the opportunity to cut off a lot of yards. Sadly, when you find yourself in the weeds or behind a tree you won’t be able to blame tight fairways for your troubles.

This course has large greens that are in great shape. Most are tiered just to make it interesting. Crafty undulations test our skill at reading greens.

The sand traps range in size from small, almost pot bunkers, to large bunkers that are almost a work of art with the contours that were put into them. Arnie didn’t want to punish us with sand traps. I think he must have added them just to help spruce up the course.

When Arnie was a boy growing up helping his dad mow fairways with that Ford tractor we see on television, I am sure he had a pet dog because he sure likes doglegs. Half or more of the holes on this course has some degree of dogleg. Some very slight and a couple almost ninety degrees. Most are some where in between the two.

The large fairways and greens make Legend the type of course that Arnie would want us to play because after all, he is the Ambassador of Golf. He’s a nice guy. He wants us to enjoy the game. Just relax and enjoy the beauty of the north woods. Right?

Although The Legend is a thing of beauty, don’t be lulled too quickly into a sense of everything being all right. Arnie, the ambassador of golf, had a few sneaky things to add to the mix at The Legend. I believe the golf gods made him do these things.

I think the golf gods made Arnie leave a few trees on the corners of a some of the doglegs, or just off to the side of some greens. Trees that you hardly notice. Trees that you think are really not in the way.

Well these trees can deflect shots better than NHL goalies. The Russian five couldn’t get a shot past these trees. Just when you think you got one past them, smack! So quick you can’t even see it.

Then the golf gods had Arnie add a few mounds that just nudge your nice drive into the rough, or even worst, into some wetland that Arnie wouldn’t have left there.

And they were still not satisfied.They had Arnie cut a creek or two across some fairways that you pay no attention to until you start looking for your ball.They had him put a small river and some big boulders in front of a par five. They had him move fairway traps to bring them more into play. They had him raise some greens up just a smidgen so your ball now has a chance to kick into the sand if you are just a little off with your shot to the green.

It must have been the golf gods. Arnie would never do that to us would he? He’s too nice a guy. If Arnie did this, and not the golf gods, he is a genius at putting the trouble in the spots that give you the opportunity to make a great shot, but grabs the shot that is just a little off. He makes you pay a small price for not paying attention to where your shot should be. He makes you do what you should do all the time when you play golf. Think.

The Legend is sneaky tough. You just don’t notice the trouble. It’s hidden in all that beauty like that snake in the garden.

So enjoy the views, but pay attention.

My hats off to Arnold, and the Legend. 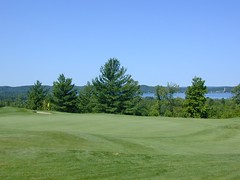 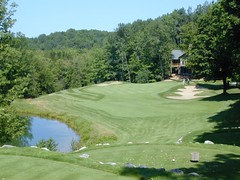 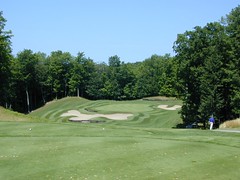 More Information on The Legend at Shanty Creek >>>>